Two days later, two more signs appeared, tidily planted next to each other on the same lawn: McCain-Palin and Obama. (I don't think the latter had Biden's name on it.) Yup, living together, maybe sleeping together, in the same household.

The campaign is growing more intense in this battleground state as we enter the last two weeks.

The Guardian UK says this morning that the South may be shifting toward the Democratic Party for the first time since the Civil Rights Act and Voting Rights Act came to pass in the mid-1960s. We shall see. 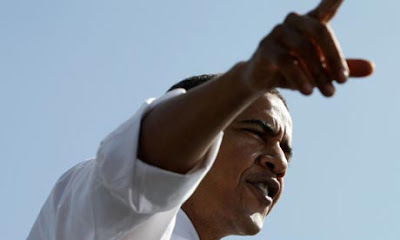 Brought to you by your daily ¡Sí, se puede!

Activated till the polls close on November 4.
Posted by Jane R at 7:47 AM

The good news is, the four McCain signs were all on one lawn.