It's only going to get more busy, so while there is still time, a little update:

1. The weather is clear and gorgeous and almost warm. We had a spectacular view flying down over Chicago at night with the city's grid landscape all light up.

2. It took me as long to get from O'Hare to the hotel downtown as it did for the plane to fly from Greensboro to Chicago.

4. The hotel is a maze. I've gotten lost twice already, and I am a veteran of much girl scouting with a good sense of direction.

5. I went in search of food and found pappardelle with vegetables and some kind of fancy-shmancy parmesan. I almost ordered room service but it was the same food, only pricier, and it's already bad enough. So I suffered through the noisy half-closed hotel restaurant. Question: WHY do semi-chichi places feel they have to blast rock music through their eateries and lounges? You can't heard yourself think. With this statement, I am officially an Old Fart.

6. I have run into several friends and colleagues already. The conference officially begins Saturday but there are a gazillion pre-conference meetings. There are relatively few of us around, though. Tomorrow night and Saturday it will get truly crazy.

7. I left my name badge and other registration stuff at home because the study at my new house is only half set up and I was rushing to leave after my 4 p.m. class and changing cat-sitter plans. Stupid, stupid. For once I had registered early and had all my paperwork. I even rescued it carefully when the house thing happened and put the AAR registration materials envelope with my folders of Very Important Stuff That I Moved By Hand. It's not an enormous big deal, since the registration people will have me in their computer, but it does mean I will have to stand in line. And I might not have as pretty a nametag. Big crises I can deal with -- it's the little stuff that gets me.

8. I also left the eat-at-the-airport yogurt at home in its cute little pot with the plastic spoon I had carefully put with it, hence my need to rustle up dinner when I arrived here. Oh well.

9. There is construction on Wabash under the El. There is always construction somewhere in downtown Chicago. Wait, I haven't been here in 15 years, this generalization won't work.

10. I ran into Mary Evelyn Tucker and John Grim (who are married to each other) and had a lovely chat with them. They invited me to the Religion and Ecology Luncheon tomorrow. They've been at Yale for three years and are happy there. We knew each other in Berkeley. They are also leading an afternoon session with this description:
This session will feature the new film Heart of the Universe with Brian Swimme. This is the first film to offer a comprehensive narrative of the evolution of the universe and the earth. The film draws on the best of current science blended with a poetic sensibility that evokes awe and wonder. This symposium will be led by Brian Swimme and Mary Evelyn Tucker, who together wrote the script and the accompanying book.

I know this will be wonderful and groovy, but I think I will just go to the lunch. Tomorrow is for the Art Institute and working on my paper and also for remedying my registration materials problems, and then at 4 p.m. is the annual meeting of the Feminist Liberation Theologians Network (FLTN, this is the land of acronyms, as are most professional organizations or clusters of organizations) and we're off and running.

In case I don't write again for a while: Saturday morning (another pre-conference meeting) is the Society for the Study of Anglicanism (SSA). Topic: "Christ and Culture: Post-Lambeth Perspectives." (I just added a whole paragraph here and decided to delete it for reasons of diplomacy. What I will say is that I'm not sure I want to spend an entire morning on Lambeth postmortems right now.)

At the same time are a forum on religion and violence, a panel on "Presidential Politics and Religious Rhetoric", a meeting of the Society for Buddhist/Christian Studies with a focus on Merton this year (boy, that one is tempting), and the Presidential Address at the Society for the Study of Christian Spirituality (Mary Frohlich, Catholic Theological Union, Chicago on "Under the Sign of Jonah: Studying Spirituality in a Time of Ecosystemic Crisis") , a Global Ethics and Religion Forum on "The Role of Religion in a Just and Sustainable World" with six panelists from different fields, and numerous other sessions. And that's before the official beginning of the AAR.

All for today. Peace out. 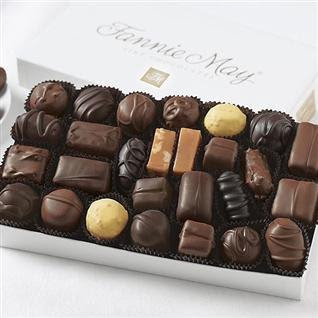 Photo of a little something from "Iconic Chicago Chocolate Maker Fannie May" (dixit a local business rag), whose newish store I (in the airport van) passed on Wabash.

Oh Jane- have a great trip, yogurt and paperwork leave-behinds not withstanding!

I love Chicago, I used to go there all the time.

One of my favorite flight memories is a view of Chicago on a clear winter night. Thanks for the reminder.

Glad you've made is safely. As a native Chicagoan, I can affirm that your generalization about traffic is spot-on.