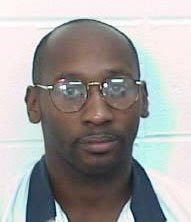 Janinsanfran posted on this on Tuesday. You may remember I posted about Troy Davis a few weeks ago. ("Blood on our hands," September 23.) I'm surprised I have not yet heard from either Amnesty International (which has taken up Davis's case) or People of Faith against the Death Penalty (whose e-mails were a little slow on the uptake last time there was news, but you'd think they'd write us on this one), but Jan heard from Equal Justice USA. The Supreme Court denied Davis's cert (= certiorari) petitition two days ago.

Amnesty does have an update on its website. Davis is scheduled for execution October 27. Pray.

There is a global day of action on October 23 and the Amnesty International site has information on what you can do and whom you can write. The ACLU is also involved in this case. MikeF wrote in from England last time I posted here that there has been significant attention to Troy Davis's case there. I see on AI's site that there has even been a Resolution from the European Parliament.

You can write the Georgia Board of Pardon and Paroles here.

Troy's website is here. I missed his birthday, which was October 9 - hadn't noticed it was coming up. You can still write him a note!
Posted by Jane R at 3:27 PM

Thanks for posting this- it is so important.

God have mercy on us all.