My very nice publisher, Tom Grady, sent me some photos yesterday. This is the new edition of When in Doubt, Sing in production.

Tom writes: "The sheets have all been printed, and now it's being folded and gathered in preparation for the binding either later this week or early next." 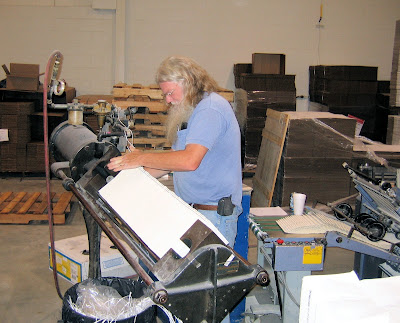 Isn't this fun? I don't know the name of the bearded printer, but he's in Indiana and that really is my book. Enjoy.

(Friday: Now I do, thanks to Amanda the Publicist: His name is Robbie Thomas and he's the binderyman.) 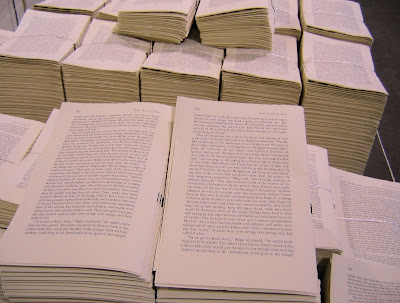 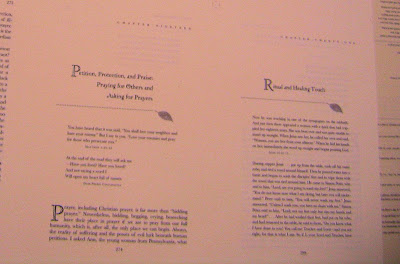 Coincidentally, just yesterday, in one of my classes on Christianity in the 16th century, I was telling my students about the relationship among the advent of the printing press, Christian humanism, and the Reformation.

I love books. Always have. One of my favorite books as a child was a French novel called La Petite Plantin, about the daughter of a printer named Christophe Plantin (a real historical person) who lived and worked in the Low Countries (Antwerp, if I remember correctly -- Anvers in French, a city in what is now Belgium) after the invention of the printing press and during the rise of the Reformation. I loved it because it had a strong female heroine, printing presses, language, and even a love story, though that was not the central thread of the biography. What is interesting is that the big project in the story is a multilingual (polyglot) Bible and that at the time I read the story I had no idea that I would become an active Christian, much less a preacher, nor that I would be teaching Christian history and theology. I just loved the book. I still think of it. I don't know where my copy is. When my parents moved from France back to the U.S. they couldn't move all my old books and many of my childhood books stayed in Europe. They gave some to friends and family so it's possible my goddaughter's family have some of them. Perhaps some day I'll find and read that book again.

I also love printing presses -- and old-fashioned teletype machines. My father was a journalist when I was growing up and I remember visiting his office when I was young and he was working for a news agency. It had a newsroom in the old style, wide open with everyone working in one space, and you could hear the clatter of typewriters and of the teletype. To this day I find those sounds both comforting and exciting. I also used to fall asleep to the sound of my father's typewriter in the next room. To me, this is one of the sounds of home. The typewriters are in storage (I don't think either my father or I can bear to let go of our typewriters even though we no longer use them) and both of us --and my mother and brother too-- have computers with near-silent keyboards, but the sound of the typewriter is like a heartbeat to me. 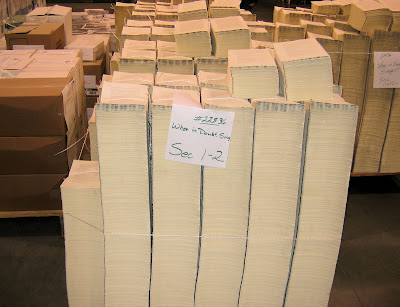 I woke up thinking about you and your book this morning, so it is great to see this.

How beautiful it looks! And how cheering to see book-making in progress. It's a good book, Jane, I remember well, and glad it will be around in a handsome edition.

(Won't be ready for Christmas presents this year, but there's next year...)

Oh, this is so, so cool! Thank you for sharing this Jane. I am so happy for you... and very hopeful we might be able to make something happen here with you.

You won't be ready for Christmas? 'cause the book will, it comes out November 1. I will have a copy in my hot little hands by Nov. 3 at the party in Chicago at the American Academy of Religion. Yes, there will be a Greensboro party too and probably a Boston one and maybe some others.

Thanks, Mags and Fran. I look forward to seeing you later this year or early next, one way or another!

Congrats Jane. I have not had the pleasure of reading it. I do review books! LOL...I am very happy for you. It is a dream of mine I doubt I will ever realize. To be published is to be in nirvana! Congrats congrats.

As I said before... I can't wait to get my hands on this book!

I love these pictures. As my Favorite Writing Teacher would say, they are filled with the "doing-ness" of book-making.

Jane! How exiting to have the pictures of your book being put together. I can't wait for my copy to arrive. Did I tell you that I pre-ordered? I believe that I did, probably more than once.

I love books. There's something about holding a book and reading that the internet will never replace.

My word verification was "pileys", pileys of pages that will be made into Jane's book.

How very exciting this all is.

Have just pre-ordered as well

Congratulations! Wonderful to see it take shape and come to birth. Here's to real books in an otherwise electronical age...