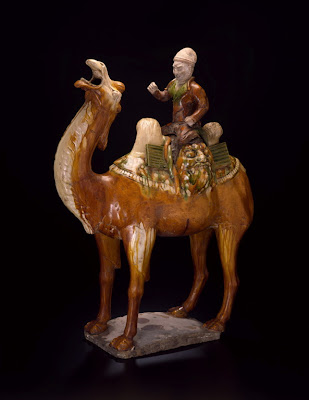 Remember last November? The American Academy of Religion (AAR), just before its split from the Society of Biblical Literature (SBL) (rumor has it the two Annual Meetings are going to get back together, but I digress), was at the two societies' joint conference, just before Thanksgiving, in San Diego. I was a little wacked out from jet lag and culture shock, having just returned from another conference in Belgium with a side trip to Paris, or maybe Belgium was the side trip and Paris was the main course; they were both wonderful.

At the San Diego meeting my colleague Eric and I were interviewing candidates, sixteen of them as I recall, for the soon to be vacant position in our department (and eventually, in the spring, hired Parveen, our new colleague who arrived two and a half months ago) and the conference was half consumed with that work. It was tiring. I also was a respondent to a paper and attended a few other sessions besides the one at which I was a respondent. It's like going to school for three days, except that last year I couldn't do as much learning as usual due to our being "in a search," as they say in academe. I did manage to have a meal or two with friends.

This fall the two professional societies are meeting separately and at different times in November, and I am only going to one of those conferences, the AAR one, which is in Chicago this year. It begins this weekend. I head for Chicago later today, after my late afternoon class, because I have a pre-conference meeting tomorrow and also because I want to make sure I get to the Art Institute, which is very close to the hotel. Girl with no social life and a big culture deficit finally gets a break.

It's especially nice to see some of my friends and colleagues from the West Coast. I'll be seeing some from California and Oregon this year, and also some folks from the U.K. and a colleague from Mexico I haven't seen in years.
My publisher is throwing me a little party Sunday night in honor of the book's release; Chicago folks or people with Chicago peeps (ahoy Dennis) write me at widsauthor at earthlink dot net, and I can have Amanda The Publicist contact them with the info.
Monday morning I am presenting a paper (my first one at the AAR, I have only given responses to other people's papers thus far, the competition can be stiff to get a paper accepted) in the morning. Have I finished writing it yet? Of course not. The title of the paper is pretty sexy, but if I write it here MadPriest will mock me (he had a field day with this last year) so perhaps I'll just write it in the Comments section below.

In the afternoon I am presiding at a session where other people are giving papers. It's not as glamorous as it sounds: I get to be the timekeeper and hold up little signs saying "TWO MINUTES" and I facilitate the discussion after everyone has presented.

Then I fly back to Greensboro, and Godde and the airlines willing, get in not too late, get a good night's sleep, and get up Election Day and volunteer for the Obama campaign until it's time to teach my afternoon class. Yes we can.

Brought to you by your daily ¡Sí, se puede!

Activated till the polls close on November 4.