Phyllo, fillo, I dunno. I always saw it spelled phyllo. Then I got a package of frozen phyllo dough but the box said fillo, and so did TCR's blog, which I read a few days later. (Coincidentally, TCR and I both decided to experiment with this thin pastry dough around the same time.) So I spelled it fillo here, and PJ, whose real name begins with Phyll, noted that she'd always seen the thing spelled phyllo, and she's probably the bearer of correct spelling, being an MFA and a writing teacher and all.

Anyway, whatever it is, it's good and I have been experimenting with it.

The Cunning Runt (TCR) over at Little Bang Theory has been baking main courses, like seafood in fillo. Yum. I am not much of a baker and thought dessert might be interesting. It being apple season, I made a mix of apples (locally grown), cinnamon, nutmeg (freshly grated if you please), and walnuts (which I happened to have in the freezer; yeah, keep them nuts in the freezer --no jokes please, I mean walnuts and cashews and the like-- so they will not go rancid or get soft) with a touch of maple syrup and then did the phyllo thing and made several different shapes of pastry (flat, rolled, more phyllo layers, fewer phyllo layers) to see what would happen.

"Doing the phyllo thing" means you have to take a sheet of phyllo dough, brush it with oil or melted butter, fold it, repeat, stack, cut, etc. It's basically a puff pastry with most of the work done for you 'cause if you buy this stuff frozen you won't have to make the dough and then roll it as perfectly thin as a Greek or Austrian or Turkish grandmother could do.

The not entirely reliable Wikipedia is pretty accurate about phyllo (the original Greek spelling) or fillo, and notes that this kind of pastry dough appears all over the former Ottoman Empire and its border lands, which is why your Jewish grandmother made strudel and the ladies at Dormition of the Theotokos Greek Orthodox Church up the road (yes, in Greensboro!) make spanakopita and in Turkey cooks make börek, and there are several kinds of baklava from various places around the Mediterranean.

This phyllo turns out to have been not only organic, but vegan. Hence, no dairy. I decided I might as well go all the way and brush the sheets of dough with oil (I used canola oil) as the recipe on the box suggested and not with melted butter. This also, I thought, would mean I could eat lots of whatever I made. Rationalization! Can't live without it! (Remember the quip by the Jeff Goldblum character in "The Big Chill" about how you've had a day without sex but you've never had a single day without rationalization.)

In any event, the key thing, which required a bit of planning, was the defrosting and the refrigerating. Which is a whole lot easier than making the dough from scratch, but you still have to plan, which in most people's lives is not too easy, given children, jobs, spouses, urgent household tasks, unpredictable office or church schedules, et al. This timing is key because the dough can't be too cold or too warm since you have to be able to lift it and fold it and it is paper-thin.

Then there's the fact that you can either 1) refreeze the dough and use it later (meaning you have to go through the whole defrosting thing again) or 2) refrigerate it and remember that it only lasts "a few days."

Things made with phyllo dough don't really last well, not so much re: food safety as re: the dough, which will lose its crispiness if you don't eat all the pastries right away. Of course you could saturate them with sweet syrup and make something baklava-ish, but I am refraining eating baklava more than a few times a year. Also, I don't do super-sweet much. I really didn't want to re-freeeze, so this meant keeping the dough (what was left over after the first baking) in the fridge and using it fast. Three nights in a row. With enough left over for breakfast.

Day One of the Phyllo involved the apple mixture and various shapes and thicknesses of dough.

Day Two of the Phyllo involved the plums I had been saving in the fridge for a couple of weeks, past the end of the plum season, under the illusion that I would make some kind of plum tart or plum crumble or, in extremis, stewed plums. These are cooking plums. I wasn't sure till today what their name was in this country; apparently they are called "Italian plums." They are not the best to eat raw (for a nice sweet-tart juicy plum, you want a Santa Rosa, preferably fresh off a California tree within the last day or two) but they are divine cooked. 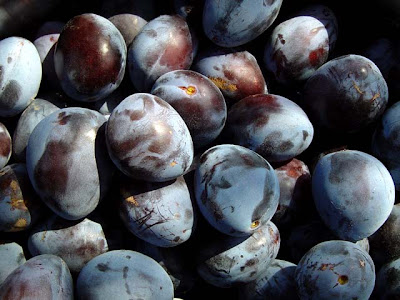 Day Three of Phyllo involved an apple mixture again, but with different apples and not very many walnuts, because I ran out of them, so I added some raisins and did not add anything else to sweeten. I used cinnamon again (less than before, I was experimenting with that too) and nutmeg. By then I had figured out the best thickness and shape for this kind of dish. I am now ready to make this for guests.

Reheated in the toaster oven to crisp it up (not quite good enough for guests, but good enough for family), this fruit pastry is also really good for breakfast. And again, it's not super-sweet (the filling is mostly fruit) and the kind of fillo I used had no butter in it.

The same brand, Fillo Factory, makes whole wheat fillo and spelt fillo. Not sure I saw any of those at the food co-op, though. I saw the spelt and whole wheat info on the Web.

Oh Jane- between you and TCR, I may have to try working with phyllo. I have always been intimidated.

(You do know that I have met TCR, right? He is delightful beyond words.)I don't think I knew you so well back then.

Anyway, this all sounds positively great.

BTW- I so love that Jeff Goldblum line and have used it frequently over the years.

Oh, I was already reading your blog at the time and I remember that meeting well!

Glad someone else likes that Jeff Goldblum line! ;-)

This is great! Can't you also make it stick together by putting a little water on the edges? I have an aversion to putting oil on everything! :o)